What do horsemeat burgers, fat Americans and starving Africans have in common? They’re all symptoms of our ****** food system. Before the UK discovered it had been eating Boxer the horse for yonks, China had a series of incredible fake food scandals. These stories are just the tip of the iceberg; Western eating habits have shifted over the last century so that now they are the number two cause (after smoking) of the number one killer in the US and UK: heart disease. They’ve also gotten us into a situation where we have one billion starving people and one billion obese people in the world today. How the heck did this happen? 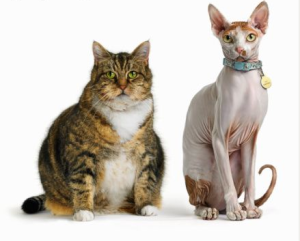 shameless use of a fat and weird looking cat from http://www.tumblr.com/tagged/skinny-cat

Over the last 30 years our diets have become increasingly similar across the world[1]. The average person in the US now gets 67% of their calories from just 3 ingredients: corn, soya and sugar[2]. These eating habits have been exported from the US globally along with the rest of the US culture[3] so that heart disease is now soaring in Asian countries. And we don’t even realise what we’re eating.

There’s even corn in your coca cola

In the US one in four foods contains corn, but most of it is hidden. Unappetising sounding ingredients like high fructose corn syrup and citric acid (both of which are in your coca cola) along with monosodium glutamate and sorbitol are tucked away in the small print so that most people don’t notice them.

Not only do we not know what we’re eating, we also don’t know what the stuff we’re eating is doing to us, and there are some very concerning signs that everyday foods could be causing us serious harm.

My wake up call: what soya did to me and a Dr pal

My housemate is a doctor and mentioned her periods had stopped for no apparent reason (squeamish boys, man up). I was surprised because mine had become irregular too. She mentioned it to another doctor who asked if we ate soya. Hell yeah, every day! We had soya milk with our tea and porridge in what we thought was a healthy breakfast. So we stopped drinking soya…and our periods returned as normal. A food and health expert pal called Rich Enion explains that ‘soya contains toxins and plant oestrogens powerful enough to disrupt women’s menstrual cycles’ – and it’s also linked to cancer, ADHD, loads of things that I’d certainly like to try and avoid. If it’s doing that to women and our government and food industry aren’t mentioning it what else is happening?

88% of corn and 94% of soya beans are GM’d in the US. Despite claims by the producers that this is safe we don’t know what GM is doing to us, but several studies poke big holes in the GM industry’s claims that it’s crops are safe and benevolent. These studies suggest that GM does not improve farming and in fact poses very serious health risks. That study also found that mice eating GM corn weighed more than mice eating normal corn. That could be seen as a positive thing if you’re starving, but it’s not doing any favours to the obesity epidemic.

How smart and sweet are our governments?

We don’t need any refined sugar in our diet, at all. It’s just there for fun – eating a massive cake is like getting drunk with your mates; it’s silly, but it can be really fun. But seeing as refined sugar causes obesity (check out Dr Lustig’s brilliant Sugar: The Bitter Truth) and heart disease, and many scientists think we’re literally addicted to it (hence the 4 o’clock in the afternoon cravings) people draw parallels with smoking.

When evidence showed that cigarettes were killing us, governments eventually introduced legislation to encourage citizens to stop smoking. What’s happening with sugar? The UK’s largest EU farm subsidies go to the sugar producer Tate and Lyle, and Nestle are second. Actually there are two things that make that statistic even more ominous. Farm Subsidy revealed that 92% of the EU subsidies aren’t even published (they made a good little film on that here) and if you take a look at Tate and Lyle’s website one of their main ingredients isn’t even sugar cane, it’s corn… which they use to make high fructose corn syrup…which is what Dr Lustig’s video (above) explains causes obesity.

In the US a report found that subsidies in the Farm Bill overwhelmingly went to ingredients that fuel the junk food industry – not fresh fruits and vegetables. This means that the prices of corn, soya and their derivatives (like high fructose corn syrup), are artificially cheap, which makes them more appealing to buyers. That’s massive manipulation of the market – us. So Good.Is made a frightfully good infographic about it, which you can see here, and the King of Corn made a very excellent film about it too:

‘The American food system is built on the abundance of corn, an abundance perpetuated by a subsidy system that pays farmers to maximize production’

Those US billion dollar subsidies are also starving sub-Saharan Africa. The US food industry lobbies hard for these subsidies and trade agreements, which keep US food prices artificially low and attractive to us consumers. By doing so these low prices create a pincer attack on the sub-Saharan food industry. Firstly it makes the largest corn market in the world inaccessible to other countries because they simply can’t compete with the artificially low prices. In her book ‘Winner Takes All‘ Dambisa Moyo explains ‘Oxfam estimated that Malawi could have significantly increased exports to the European Union in 2004 had market restrictions not deprived it of a potential US$32 million in foreign exchange earnings, equivalent to around half the country’s pubic health care budget. As a result of the huge subsidies, some six million rural households across the Atlantic Ocean in Central and West Africa were unable to compete in the huge US markets, despite lower production costs.’

That’s even though these sub-Saharan counties have most of the potential tillable land left in an increasingly land scarce world. Blocked out of the largest global markets, the sub-Saharan agriculture industries don’t develop.

On the flip side these subsidies also mean the US agricultural industries over-produce corn, creating the food surplus mountains. This Good.is infographic shows how the US wastes 40% of its food (the UK and much of the rest of the world aren’t much better, check out this great TED by Tristram Stuart).

The second prong in this pincer attack is that Western aid for Africa has also shifted over the last 30 years, from financial support aiding the development of agriculture infrastructure, to actual food. Dambisa Moyo explains that ‘in a cruel shift, that food is actually from the very food mountain that represents the effects of the subsidies.’ So rather than supporting the development of infrastructure in sub-Saharan Africa, the US palms it off with its surplus food.

How to solve world hunger… and fit into your skinny jeans

So here’s the hopeful bit, because despite all this, I believe that we have all we need to sort out these problems – the signs are already here; the 2012 Global Hunger Index found that world hunger is slowly declining. Even Bono reckons in his TED talk that ending world poverty is reachable in his lifetime, and since I’ve become more mindful of food I’ve fitted into my skinny jeans for the first time! That seemingly flippant point highlights what’s at the bottom of all this – because it’s only by realising that we’re all connected in this food system that we’re going to make real systemic change.

Now that I have a better idea of what I’m eating and how it effects and the wider food system, I find it very, very hard to be wasteful. Instead of eating loads of chocolate biscuits like I sometimes used to, I get indignant that our governments are taking our taxes and paying the sugar and corn industries to over produce this stuff so that they can make junk food that’s so cheap it’s filling our shops. That these industries are so heavily subsidised they can afford to pour millions into advertising to us to make us want to eat their junk. That our governments know all this and do nothing. That they as a network with (arguably) distributed awareness of all the facts and responsibility are actively colluding with the food industry and manipulating our diets.

I got SO indignant…that I’ve started writing blogs like this, eating the best food I can find, running a little pop up food restaurant serving the best food I can find to our neighbours, experimenting with growing veg in our window box, talking to friends and shop owners and anyone else whose half interested about this stuff! I got so indignant, so fed up with waiting for some kind of change, that I realised I had to start taking responsibility for making what little change I could myself, in our home, in our community. So I’m doing what I can, and it’s making me happier and healthier than I’ve ever felt, which is why I thought I’d share it with you.

Lastly here are a mixed bag of other things that either are or could make a much bigger change, along with some awesome people who are already making that change happen…

Start putting honest, accurate information on our food, and holding producers accountable when they mislead us.

Stop subsidising the junk food that makes us sick and kills us.

Start getting educated about our food: this TED playlist rocks for getting into it.

Stop wasting food: in our homes, industries and supply networks. Lovely Jenny’s Rubies in the Rubble uses surplus food to create delicious luxury chutney. O, and it also helps people get back into employment at the same time. Awesome.

Start enjoying food. We’ve got anorexic teenage girls, people who wolf down their food without even looking at it and they both wonder what’s wrong with their bodies. Michael Pollan has the rules on enjoying food properly.

I thought I’d share this blog because I want to find out more, so if you’ve read through this beast please tell me what you think and what else you know. In the mean time, I’m off to enjoy a gorgeous lunch…

Globalisation of Indian Diets and the Transformation of Food Supply Systems, Prabhu Pingali and Yasmeen Khwaja, 2004

[2] Michael Pollan, In Defense of Food